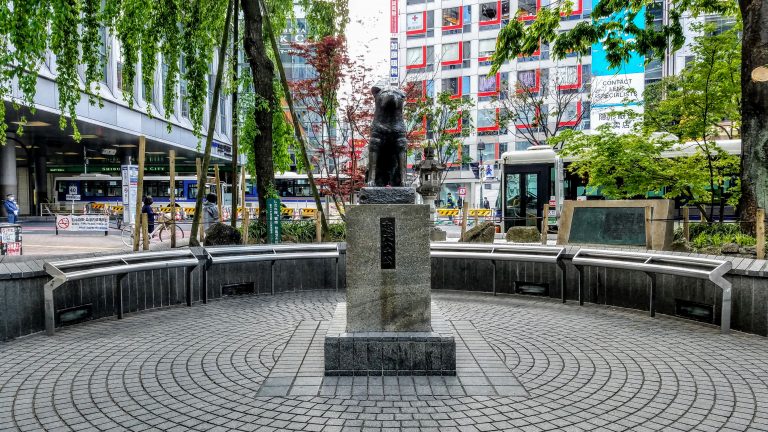 Shibuya (渋谷) is one of Tokyo’s most dynamic neighbourhoods – a hotbed of entertainment, shopping, eating and drinking. It’s a must-visit on any trip to Tokyo. Learn more in our Shibuya guide.

Shibuya-ku is of the twenty-three city wards of Tokyo. However, when most people think of Shibuya, they are specifically referring to the area around Shibuya Station, one of the city’s primary transportation hubs. One of Tokyo’s most colourful and busiest districts, Shibuya is packed with shopping, dining and nightlife options.

A Brief History of Shibuya

Shibuya was formally the site of a castle in which the Shibuya family resided from the 11th century through the Edo period. A foundation stone still remains at Konno Hachimangu Shrine. Following the opening of what is now the Yamanote Line in 1885, Shibuya began to develop as a transportation hub, bringing with it commercial and entertainment development.

The Tokyu Toyoko Line opened in 1932 connecting Tokyo and Yokohama through Shibuya. What was to become the Keio Inokashira Line opened in 1933 and a train line to Toranomon, now part of the Tokyo Metro Ginza Line, opened in 1938. The station now handles over 2 million passengers a day.

The area is undergoing major redevelopment lasting two decades. It really kicked off in 2008 when the Fukutoshin Line was opened. Then they linked the Tokyu Toyoko Line directly to the Fukutoshin Line in an incredible piece of engineering. Several new buildings have opened over recent years, including Shibuya Hikarie (2012), Shibuya Stream (2018) and Shibuya Scramble Square and Shibuya Fukuras (2019), and more will be opening until works are completed around 2027. The pedestrian traffic flow around the station has been dramatically improved – they have moved the Ginza Line platform, and they are moving the Saikyo Line platform to be closer to the Yamanote Line.

Shibuya is forever connected to the infamous story of Hachiko, a dog who waited on his late master at Shibuya Station every day from 1923 to 1935, eventually becoming a national celebrity for his loyalty. A statue of Hachiko was built adjacent to the station, and the surrounding Hachiko Square is now one of the busiest meeting spots in the world.

Things to do in Shibuya

Shibuya is itself the major ‘thing to do’ – walk around and feel the energy. Here’s list of some of the major attractions in Shibuya:

Shibuya Crossing: Yes, that one. The world’s busiest intersection. Surrounded by neon signage and giant video screens, it fills with pedestrians, making it a popular people watching and photo spot. Join the crowds and experience crossing the crossing.

Hachiko Statue: A statue of Hachiko (see above in history), the infamous dog who waited for his master. His statue can be found in Hachiko Square, connected to the Hachiko Exit of Shibuya Station. Join the line and take your photo.

Shibuya’s streets are the birthplace of many of Japan and the world’s fashion and entertainment trends. The streets are stuff with fashion stores. Major department stores can be found around the area, most belonging to either the Tokyu or Seibu corporations. The most iconic are Shibuya 109, a mecca for fashion-conscious teens, which specialises in young women’s fashion and Tokyu Hands, a unique one-stop household, lifestyle and DIY goods shop.

If you are looking for electronics, you are covered with branches of Bic Camera, Yamada Denki Labi and an Apple Store.

Other interesting stores include anime and manga hub Mandarake and the Mega Don Quijote, the discount megastore, which is an experience in and of itself.

Eat and drink in Shibuya

Shibuya has plenty of food and drink offerings, including some great cafes. As well as on the street, you’ll find restaurants in most of the shopping complexes. There are far too many to list here. Check out more of our curated recommendations as our restaurant review database grows. Some Tokyo Authority favourites include:

Hayashi: Hayashi is worth the journey just for their amazing soup. The shop blends a creamy tonkotsu broth with an umamiful fish dashi and finishes it with an intense shoyu tare and a hint of yuzu citrus. The shop is run by an elderly couple and only opens for a few hours a day at lunch. It is never without a line, with just reason.

Pizza Slice: The original Pizza Slice is in Sarugakucho in an undervisited part of Shibuya on the way to Ebisu. It has been joined by Pizza Slice 2 in Omotesando and ‘Pizza Slice and Soda Fountain’ in Roppongi. Find yourself a seat, then peruse the New York-style pizza on offer and place your order. Thin, crisp crusts and rich, mozzarella-driven toppings are sold by the slice and served on paper plates.

Shibuya is full of bars and clubs. Those up for more late-night delights should visit Love Hotel Hill. Here are a few clubs to check out:

Sound Museum Vision: This 1,500-person venue was opened in 2011. It regularly features some of the world’s top DJs spinning trance, hip hop and techno.

Womb: This vast club featured in the film Babel. Opened in 2000, it remains of the city’s largest electronica dance clubs with four floors and a capacity of 1000.

Club Asia: Two dancefloors and three bars await at Club Asia, which opened in 1996 and is still going strong.

Where to stay in Shibuya

With great transport connections and plenty to do in the area 24/7, Shibuya is a great place to be based in while exploring Tokyo. The following hotels have been personally inspected by the Tokyo Authority team.

One of the cheaper luxury hotels in Tokyo, the Cerulean has a great location close to Shibuya Station and features relatively spacious rooms.

Embodying ‘New Basic for New Culture’, the brand concept of the lifestyle brand koe, this hotel has a great restaurant, and frequently hosts live music at the weekend.

Shibuya is accessible via the following train and subway lines: