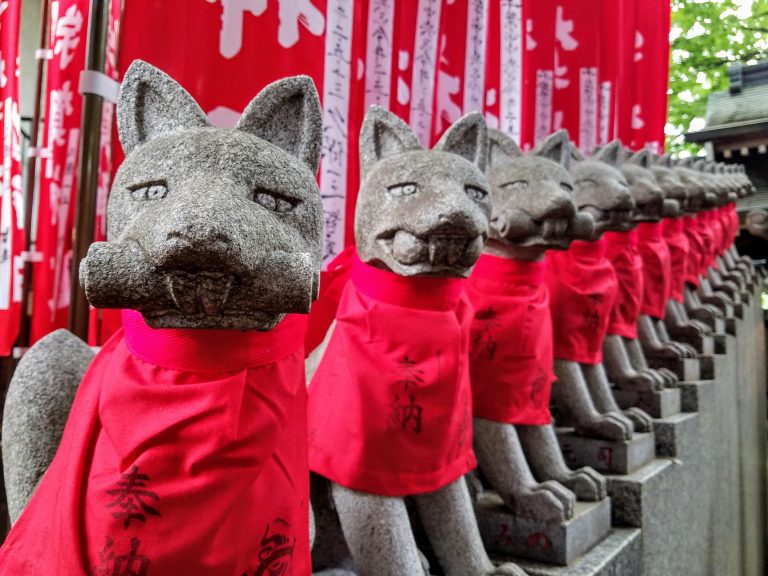 Toyokawa Inari Tokyo Betsuin (豊川稲荷東京別院) is a Buddhist temple of the Soto Zen sect, which enshrines Toyokawa Dakini-shinten, also identified as the Senju Kannon. Learn more about the fascinating, complex history and what to explore at this off-the-beaten-track temple in Akasaka, Tokyo.

Kangan Giin went to Song Dynasty China to study Tantric Buddhism. He returned to Japan in 1267. Onboard the ship back to Japan he underwent a spiritual experience in which the Buddhist saint Dakini-Shinten (荼枳尼天) appeared to him, riding on the back of a white fox with an ear of rice slung over her back and holding a jewel.

He made a statue of the goddess in honour of his vision, and Juichimen Kannon was identified as an avatar of the Dakinishinten.

This is where things get complicated. During the period of Shinbutsu shugo, the intertwinement of Buddhism and Shintoism, the line between these two religions were blurred. The images of Dakinishinten, a goddess on a fox, became associated with Ukanomitama-no-mikoto, the goddess of agriculture, who used a white fox as her messenger.

This is why, despite this and the torii gates you’ll see at Toyokawa Inari Tokyo Betsuin, the complex is a Buddhist temple and has no explicit connection to the Shinto religion.

The statue od Daikini-shiten was later brought to the residence of Ooka Tadasuke Echizen-no-kami (1677 – 1752) at Akasaka Hitotsuigi in Edo. Echizen no Kami (Governor of Echizen), served as the civil governor of Tokyo during the reign of shogun Tokugawa Yoshimune.

Ooka is a legendary Edokko (citizen of Edo) and the justice expounded in his rulings is legendary. He is still much-loved today for being an incorruptible magistrate, establishing a hospital for the downtrodden and for forming the first civil fire brigade in Edo. To this day there is a small shrine in memory of Tadasuke Ooka at Toyokawa Inari Tokyo Betsuin.

The complex was damaged during the 1923 Great Kanto Earthquake and completely wiped out during the firebombing of WW2, but reconstructed using donations.

After the temple was founded, it was visited by those who wished for business success, promotion and for protection from loss and theft.  As the Akasaka area flourished as an entertainment quarter, the temple increasingly became visited by those in the showbiz and entertainment sectors. Many celebrities and athletes are known to visit the temple to this day today. As Akasaka is a district with many offices, the associations with business success remain.

The main draw of tourists is the presence of thousands of fox statues across the complex. Foxes (Kitsune) are associated with Inari, the Shinto deity of rice.

Few other sites so openly display the syncretic tradition of Shinbutsu shugo, which is what makes a visit to Toyokawa Inari Tokyo Betusin so fascinating.

The Reikyo Zuka (Hill of Foxes) is a three-tiered spire where the majority of fox statues are found along with a statue of Inarin, the mascot of Toyokawa Inari in Aichi Prefecture.

By the way, the red rectangular banners are called nobori. They are offered by worshippers to show gratitude for answered prayers.

Given that the temple pays homage to the deity Inari, is it any surprise the favourite cuisine surrounding the compound is Inarizushi? Considered to be a favourite of Inari’s foxy messengers, Inarizushi are pouches of sweet fried tofu filled with sushi rice. Simple but effective. You can find a couple of venues to savour Inarizushi near the temple’s car park. A true local secret.

The Seven Gods of Fortune circuit is a mini-pilgrimage to visit seven shrines and temples with associations with the fukujin, which typically takes place in the first week of the new year.

At Toyokawa Inari Tokyo Betsuin, all of the seven gods are enshrined within the grounds making completion quite easy.