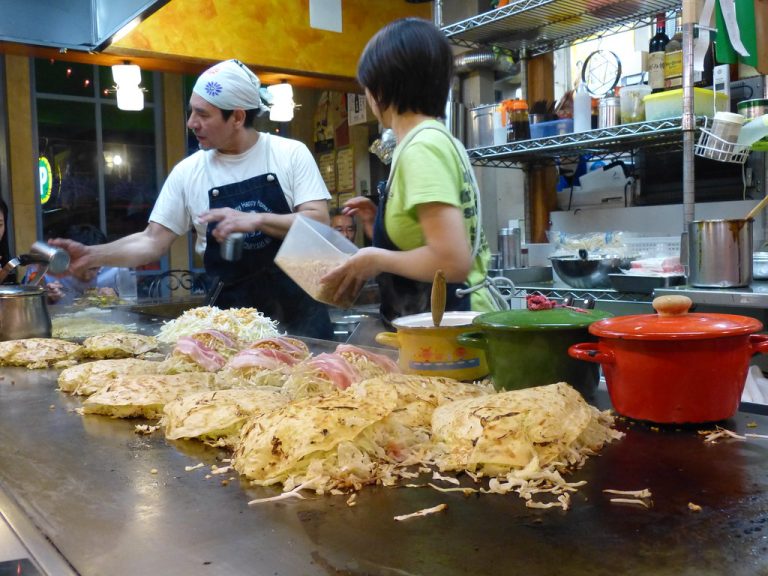 Tokyo Authority presents the authoritative guide to the history and styles of Okonomiyaki, one of Japan’s traditional soul foods.

Okonomiyaki (お好み焼き) is a popular pan-fried Japanese savoury dish containing a variety of ingredients in a wheat flour-based batter. The name is derived from okonomi, which means “as you like it”, and yaki which means “cooked” or “fried”. Toppings and ingredients vary according to region and personal preference. No one recipe defines it – it is very much up to the chef or customer. You can include meat, seafood, vegetables, wasabi, cheese, mochi, crisps… the imagination is the limit!

Okonomiyaki is sometimes described as ‘Japanese Pancake’. However, this is a misnomer. Though it consists of batter cooked on a hot surface, Okonomiyaki is not sweet and fluffy, not to mention the eclectic ingredients. A more accurate comparison, but still flawed, is between okonomiyaki and omelette.

Okonomiyaki is available all over Japan, but is particularly popular in Osaka and Hiroshima. People eat okonomiyaki at restaurants that specialize in the dish, but it can be made at home. At most okonomiyaki restaurants the tables have a teppan, an iron hotplate, on which you cook the meal yourself.

The History of Okonomiyaki

The origins of okonomiyaki go back to the Azuchi-Momoyama period of Japanese history and involve legendary tea master Sen no Rikyu (1522-1591). It is said that Sen no Rikyu served a thin crepe-like confection called funoyaki (麩の焼き) at a tea ceremony he hosted. Funoyaki which was made by mixing flour with water, roasting the flour mixture, and spreading the mixture thin on a cooking pot. The cooked cakes were served with pepper-seasoned miso pasted between them.

This special dessert continued to be served at Buddhist ceremonies during the Edo period.

The dish evolved during the Meiji period (1868-1912). Funoyaki was embraced by the dagashiya (駄菓子屋, confectionary shop) trade. Using nerian (練り餡, sweet bean paste) instead of miso, a sweeter dish called gintsuba (銀つば) was created in Kyoto and Osaka, which was then taken up in Edo (Tokyo) where it was named kintsuba (金つば).

Sukesoyaki (助惚焼), a speciality of the Kojimachi area, was one variant of kintsuba. Another was mojiyaki, which evolved into monjayaki, the Tokyo variant of Okonomiyaki (see below).

After the 1923 Great Kantō earthquake, it became popular to cook these crepes and soon, besides the sweet types, savoury varieties using fish, vegetables, and various meats began appearing.

During the ’20s and ’30s, the dish continued to evolve with more emphasis put on the sauces added. Issen yoshoku (一銭洋食, 1-sen Western food), created in Kyoto, is considered the next step. The crepe was folded in half with ingredients such as bonito powder, green onion, and tororo konbu kelp inside and Worcestershire sauce poured on top. This half-folded style is still prevalent today in the form of okonomiyaki sold in supermarkets in Hiroshima. It is also a common staple of matsuri, festival-food stalls, across the country.

The dish evolved again, and the name yoshokuyaki began to be used. Yoshokuyaki was made by spreading a flour-water batter in a circle on a griddle and topping it with negi onions and tenkasu.

In Kobe another variant, nikuten, was created. This dish tops flour batter with a ton of ingredients (beef tendon and konnyaku were staples of the Kobe original) and is fried in a pan.

The name okonomiyaki started being used in the late ’30s in Osaka, as it can be cooked with any ingredients, hence konomi – as you like it. The ‘o’ at the beginning makes things more polite.

Okonomiyaki, in its different variations, started to become more popular during WWII. Rice became scarce, and people had to get creative in using other more readily available ingredients. The simple wheat pancake fit the bill – it was nutritious, filling, inexpensive and could be filled with whatever ingredients were available.

After the war, more ingredients were added, and mixing the batter with eggs, vegetables, meat and seafood became common. A restaurant from Osaka claims to have been the first to add mayonnaise in 1946.

Nowadays, many okonomiyaki restaurants are grill-it-yourself establishments, where the customer mixes and grills the raw ingredients at tables fitted with teppan hotplates. Another style is to sit at a counter, where the chef prepares the dish in front of the customers.

There are two main variants of Okonomiyaki: Osaka-style and Hiroshima-style. Osaka-style is the predominant version of the dish found throughout most of Japan.

Osaka-style is cooked by mixing all the ingredients – eggs, shredded cabbage and flour – together. You pour the mixed batter onto the teppan and create a round shape, which is cooked on both sides.

Osaka-style Okonomiyaki restaurants usually have grills on each table, and customers make their own Okonomiyaki. Metal spatulas are typically used to slice and serve up the dish.

In the Hiroshima-style, the ingredients are layered rather than mixed. The batter is made into a thin crepe, and the ingredients are cooked separately. When ready, the ingredients are placed on the crepe, and the toppings are added. The layers are typically cabbage, pork, and optional items such as squid, octopus, and cheese. It is served on top of yakisoba, a distinctive element of the Hiroshima-style, with a fried egg and ample lashings of okonomiyaki sauce. The Hiroshima style uses much more cabbage, typically three to four times more, than the Osaka style. The order of the layers may vary depending on the chef’s style, and ingredients vary depending on the customer’s choices.

Modanyaki: Modanyaki (モダン焼き) is an okonomiyaki variant served with a layer of fried noodles (either yakisoba or udon). The name has two potential origins: Either from the English word ‘modern’ or as a contraction of ‘mori dakusan’ (盛りだくさん), meaning ‘a lot’ or ‘piled high’ signifying the volume of food from having both noodles and Okonomiyaki.

Monjayaki is a variation of Okonomiyaki that originated in Tokyo during the Meiji Period (1868-1912). Originally called mojiyaki, it was made with a water and wheat flour batter, and was sold at dagashiya. Young customers would practice writing kanji in the thin mojiyaki batter as it was cooked on the griddle in front of the shop. This led to the name mojiyaki, which means ‘grilled letters’.

Around the time of World War II, the dish evolved into its modern form, monjayaki.

Monjayaki batter is thinner than that of okonomiyaki and is seasoned with soy sauce before cooking. The main ingredients (cabbage, meat, seafood, cheese, mochi, green onions, etc.) are cooked first. They are then moved into a ring, and the batter is added to the middle. This is the spread out over the teppan and left to simmer before being eaten directly off the grill using a mini spatula. It is much runnier than okonomiyaki.

Today, monjayaki is served at speciality restaurants, many of which serve okonomiyaki as well. In Tokyo, the Tsukishima area is known as the home of monjayaki.